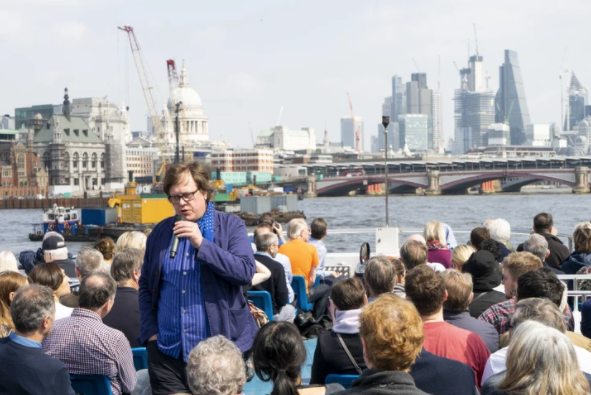 Architecture on the Thames Boat Tour with HawkinsBrown and Tideway

Together these architects have played a leading role in the design and creation of a series of landmark new waterfront parks at key locations throughout central London connected to the construction of the Thames Tideway tunnel.

Tideway is a major investment in upgrading London’s wastewater infrastructure for the 21st century; offering an exciting opportunity to enhance the appearance, identity and experience of one of the world's greatest cities through the creation of a series of new public spaces along the Thames.

This unique riverside tour will offer a fresh perspective on London’s emerging and established skyline and will be led by our specialist guide Benedict O'Looney. Benedict's in-depth knowledge – founded on his work as a practicing architect based in Peckham and a teacher at the prestigious Architectural Association – guarantees deep insight and thoughtful commentary.

The boat first ventures upriver where our guide will explore the design and history of Michael Hopkins' imposing Portcullis House, past Nine Elms, taking in the newly restored Battersea Power Station and Kieran Timberlake’s American Embassy before heading further west to hear about Hawkins\Brown’s sites under construction including sites in Wandsworth and Kensington and Chelsea.

Then heading downriver, our guide will explore the Neo-classical Somerset House and Renzo Piano's Shard, among many other landmarks and additional Hawkins\Brown sites including Albert Embankment and Victoria Embankment before returning to Crown Pier.

Along the way our guest speakers from Hawkins\Brown and Tideway’s Clare Donnelly will share the inspiration behind their designs for the eight new landmark public realm spaces that will be created as part of the enormous civil engineering project and the multi-disciplinary collaborative efforts behind Tideway’s success.