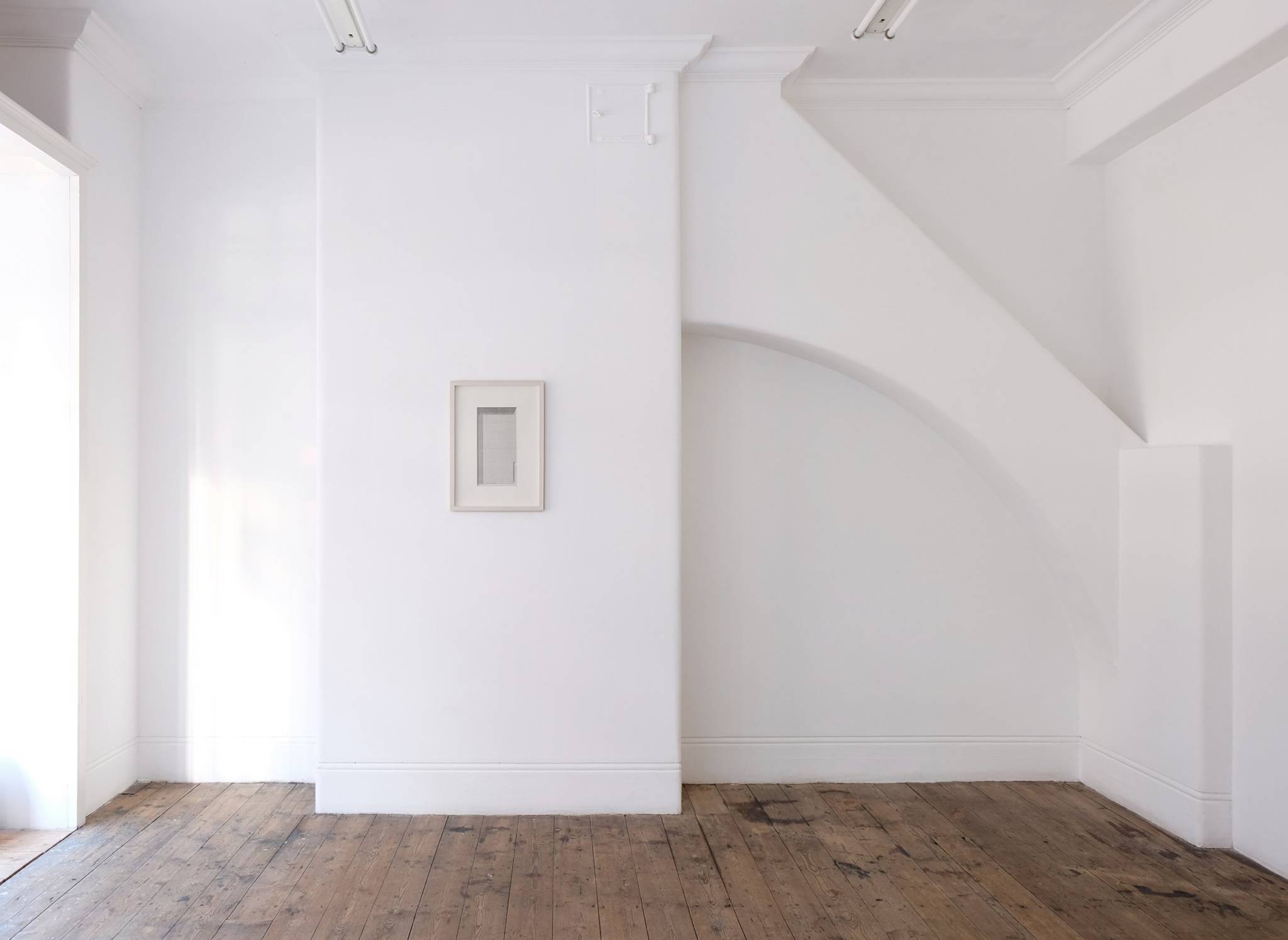 Synthesis and Destruction presents thirty-six drawings– ‘Walls’ and ‘Doorways’ – by Pier Vittorio Aureli produced between 2020 and 2021. Made in ink on paper, the chiaroscuro style of the works lends a theatrical allure to their abstract forms. Crisp frames capture the contemplative movement of rapidograph pen on paper, as if caught in the act.

‘Walls’ (35 cm x 25 cm) portrays a series of twenty-one linear tectonic forms. Deliberately drawn in axonometric perspective, the resulting cross-hatched forms extend to the borders of the paper, omitting any information about what is inside or beyond the frame. Instead, the drawings seem to emphasise the primary purpose of a wall: that is, they mark the territory and coordinate the subjects, establishing a form of association that precedes separation. The fifteen works that make up ‘Doorways’ (50 cm x 35 cm), however, are drawn from a central perspective, holding the observer suspended between the two unrepresented sides. Both series bear references to elements found across a wide historical span, from Mesopotamian to Romanesque architecture. Persian caravanserais, Egyptian temples, Islamic palaces, mosques, and Cistercian monasteries may not seem to have much in common, but in fact they all share a fundamental characteristic that is quite different from the modern Western notion of architectural monument as a closed system: they all measure, map, and modulate, and thus define space by projecting particular states of association between constituent parts, subjects, and forces, onto the territory.

The series is part of Aureli’s ongoing enquiry into elements of ‘non-compositional’ architecture, beginning with The Marriage of Reason and Squalor, a set of 50 cm x 50 cm ink drawings made between 2001 and 2014. In both the earlier and more recent series, the world is rendered as a series of architectonic fragments suspended between synthesis and destruction, and in this sense the work resonates Giovanni Battista Piranesi’s œuvre – in particular, the ‘Egyptian Fireplaces’ series, a collection of sixty-seven etchings published in Diverse Maniere D’Adornare I Cammini (Rome, 1769). Both Piranesi and Aureli address what happens when architecture goes beyond the format of a building, an epoch, or style; architecture is translated into a lexicon of tectonics and acts – rooms, walls, passages, enclosures – that present a state of timelessness. And yet within these drawings it is possible to find a subtle transition from a semantic reading of spatial elements to a semiotic one; a perpetual dialogue between recording and projection, between truth and beauty.

Similar to Aureli’s other series, Synthesis and Destruction continues a personal project. They are chapters of an unfinished repertoire. A project that dismisses the traditional rules of design, predictability, individualism, and composition instead presents figurative fragments of a non-figurative architecture. Such a conscious deviation liberates the project, allowing it to instead dwell on a particular understanding of form that perhaps is best described by the Austrian art historian Alois Riegl as Kunstwollen. Riegl’s concept of “will to art” not only suggests a formal language through which architecture can be deciphered, but also emphasises the autonomy of form; one that is liberated from historical determinations and suggests new possibilities. Aureli’s ‘Doorways’ and ‘Walls’ points at no cryptic, symbolic, or allegorical values; they are intrinsically polemic and projective. Just like any contemplative act, his drawings make a commitment to architecture, one that follows a liturgical practice.’